Following the news that Arsenal are in contact with Layvin Kurzawa about a potential free transfer in the summer, it seems that Mikel Arteta has highlighted left-back as an area that needs strengthening.

That’s despite already having Sead Kolasinac in the role and Kieran Tierney being bought from Celtic in August 2019 for around £24m.

The Paris Saint-Germain player is out of contract in the summer, but RMC Sport in France explained it wasn’t excluded that Arsenal could make a move in January.

With that in mind, it isn’t surprising to see the Gunners linked with another left-back, one also followed by Napoli in Italy.

According to Corriere dello Sport’s Campania edition, the Serie A side are interested in Konstantinos Tsimikas to bolster that area of the pitch, but they could see their efforts frustrated by Arsenal. 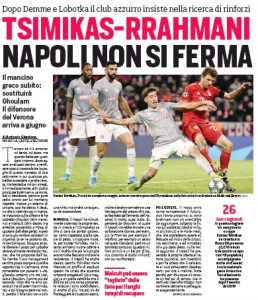 In fact, it’s believed that the ‘arrival’ of Arteta’s side on the scene has made Olympiakos’ asking price ‘rise’, seemingly much to Napoli’s annoyance.

That’s all there is when it comes to Arsenal being mentioned, but it’s enough to suggest they are indeed on the hunt for reinforcements for the left-hand side of their defence.