Arsenal flew out of the blocks against Crystal Palace on Saturday, largely thanks to Nacho Monreal being in inspired form.

The Spanish fullback scored after six minutes and then set up two other goals and was the Man of the Match as Crystal Palace hardly had a chance to catch their breath.

Monreal had to leave the pitch after 34 minutes, with Arsene Wenger saying it was due to precaution over a groin injury, and the Gunners then failed to score another goal in the match.

Despite lasting less than a half, Monreal’s performance has managed to get him into Gazzetta dello Sport’s European Team of the Week.

Each Monday the Italian newspaper pick a selection of players from outside their own Serie A, and Monreal has found his way 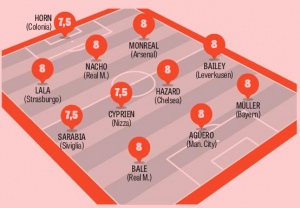 With an 8 out of 10 rating, very good from Gazzetta, no player rated more highly than the Arsenal defender.

Wenger and Arsenal fans will surely hope there’s no real injury issue and Monreal has the chance to carry on the brilliant form he showed.

“It wasn’t my fault” – Frenchman reveals why Arsenal deal never happened, ‘would have accepted immediately’