On Friday, there was a story in Corriere dello Sport suggesting that Joao Mario was reconsidering the option of moving on loan to West Ham after turning them down a first time.

The Italian newspaper, through hope more than anything, decided to throw in the idea that Manuel Lanzini could end up going the other way, which would never have happened midway through the season.

Then, Sunday saw David Moyes explain he didn’t think the club would end up bringing either Joao Mario or William Carvalho to London Stadium in January. 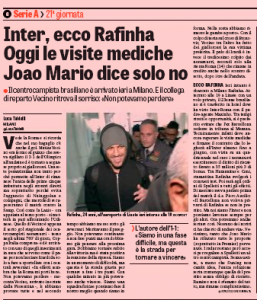 The reason behind this, according to Gazzetta dello Sport, despite them stating West Ham were ‘insisting’ on Sunday, is that the Inter midfielder decided against moving to England, refusing every offer he had on the table to stay in Italy for now.

An interesting move ahead of the World Cup in Russia, considering he’s barely playing for the Serie A side this season, and West Ham could have given him the opportunity to get regular time on the pitch.

To each their own, but, as things stand, having started two league games out of the last 11, it’ll be interesting to see whether Fernando Santos risks selecting a non-match fit Joao Mario for the upcoming international competition.