Having been a great success story this season on loan from Arsenal, it’s understandable that Marseille do not want to see William Saliba head back to London just yet.

The defender was sent to the south of France last year to enjoy more game time, which is exactly what the Ligue 1 table have given him, having collected 50 appearances in all competitions.

In fact, he’s become a key part of Jorge Sampaoli’s team, and there are some, including the Argentine manager himself, who would prefer him to stay next year too.

However, with no option to make the move permanent in the deal struck with Arsenal, it’s the Gunners who hold all the power.

La Provence have a big article on the France international’s future, and explain that things changed over the course of the season, with the London club now ‘planning next season with Saliba in their team’.

In fact, Arsenal are ‘counting on him’, even if some close to the whole affair ‘aren’t excluding a change of trend in the next few weeks’. 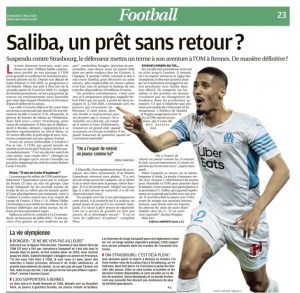 Atlético Madrid and Napoli are named as interested parties, while Marseille ‘haven’t said their last word’.

Pablo Longoria, the club’s chairman, would also like to keep Saliba, but the belief is it will be a ‘tight game’ in talks with Arsenal.

The hope is that the player’s newfound love for Marseille could help the Ligue 1 club in their efforts, as could the guarantee of playing Champions League next season; something Arsenal seem somewhat determined to throw away down their own end following a 3-0 loss to Tottenham on Thursday night.