Roma chief Tiago Pinto is preparing to conclude negotiations with Arsenal over a move for Granit Xhaka.

That’s according to Corriere Dello Sport, who say the Switzerland international was ‘convinced’ by Jose Mourinho straight away and has asked Arsenal to be sold.

They explain that the Gunners are continuing to demand €20m plus bonuses to sell Xhaka, with Roma having already agreed on a deal with the player.

He’s set to earn €2.5m a year on a four-year contract in Rome, which has been aided by the Italian ‘Growth Decree’ on taxes.

Xhaka believes that the chance to work with Mourinho is ‘an unmissable opportunity’ to relaunch his career after an ‘unhappy period’ both for him and Arsenal. 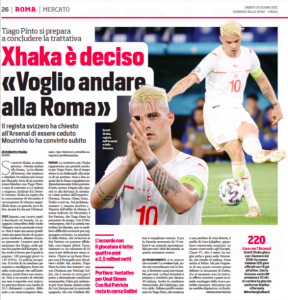 The negotiations are considered a ‘top priority’ for Pinto, who is also looking for a goalkeeper to bolster Mourinho’s ranks.

At this point, though, it all rests on Arsenal, who are refusing to move from their demands despite Xhaka’s plea to leave and start afresh.

That could change in the coming weeks, of course, with Pinto pushing and Xhaka seemingly determined to make the move and link up with Mourinho in Rome, where he’s currently playing with Switzerland at the Euros.