Arsenal are ‘looking at’ a move for Inter Milan midfielder Christian Eriksen in the January transfer window.

That’s according to Gazzetta Dello Sport, who continue to push the potential of the Denmark star ending up at the Emirates in January.

Eriksen is widely expected to depart Inter in the winter window after finding himself out of the picture under Antonio Conte.

He is keen to move somewhere for regular game time in the second half of the season so that he is in top form and physical condition heading into next summer’s European Championships.

However, finding a permanent buyer for him is something Inter know will be tough, and so they are ready to sanction a loan deal if they can make it work.

Thus, the midfielder has been heavily linked with a return to London and Arsenal, who are in dire need of a creative presence in their midfield.

Gazzetta continue that today and explain that the ‘only possible landing place’ for Eriksen seems to be the Premier League, and Arsenal are ‘looking at him’.

This is backed up by Corriere dello Sport, who say that Inter have accepted the only solution to the issue is to find an ‘exchange of loans’ or green-light a loan move, perhaps with a purchase clause tagged on.

Eriksen’s agents are working hard on a deal, and he has been ‘proposed’ to the Premier League, where Arsenal are ‘thinking about him’. 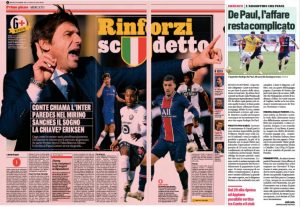 If they decide to move Inter ‘would like’ either Granit Xhaka or Dani Ceballos as a ‘quid pro quo’ in the deal, although how that would work with the latter isn’t mentioned given he’s on loan from Real Madrid.

The idea, perhaps, would be that the Gunners cancel Ceballos’ loan so Inter would be free to sign him from Madrid and thus send Eriksen back to London.

Trickier deals between clubs have certainly been done in the past, so it’s plausible, albeit a little complicated to work out.

Either way, it seems Arsenal are seriously considering a move for Eriksen, but it may take them giving one of their current players up before they can get him.