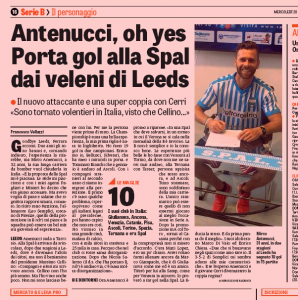 Signing from Ternana for Leeds back in 2014, Mirco Antenucci spent two good years in the Championship, earning the respect of fans in the process, before leaving this summer on a free.

Constantly in the news for all the wrong reasons, Leeds isn’t the healthiest environment for footballers and the player spoke to Gazzetta dello Sport about his time there, with some strong words aimed at Massimo Cellino.

He said: “The fans and some of my ex-teammates still write to me. From Cellino, I’ve heard nothing, but I barely saw him when I was there. We didn’t leave on the best of terms.”

The player went on to say how, despite all this, he enjoyed his experience in England’s second division, especially since his first daughter was born in England.

Scoring 19 goals over two seasons, as well as picking up seven assists, the 31-year-old made it clear the arrival of Italians en masse at the club wasn’t particularly linked to the owner, that’s just how things worked out.

The striker also reserved special praise for the fans, who are ‘crazy about football’, but used the opportunity to take aim at how the club was run.

Now at S.P.A.L. in Serie B, Antenucci is looking forward to the next step in his career, probably one of his last, but it seems Leeds will always hold a special place in his heart.

At least, their fans will.