Santos starlet Rodrygo continues to draw huge attention from the Catalan press, as Barcelona’s chase for the kid seems to be a real deal.

This Wednesday, local newspaper Sport brings a two-page story on the 17-year-old. But instead of speaking about Barça, what worries them is the Premier League competition.

The newspaper says that Manchester United are now one of the clubs in the race, having joined the likes of Liverpool and Chelsea. Jose Mourinho has ramped up the clubs scouting since taking charge at Old Trafford, and it’s no surprise the Brazilian has caught the eye.

Barcelona would be afraid that the English sides have more money to spend in the race for Rodrygo, even though he currently has a tag price, which is his €50m release clause.

As the player can’t move to Europe yet, these clubs would like to guarantee a buying clause over him, so he can be brought once he turns 18 in January next year. 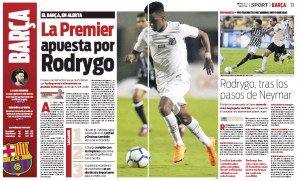 Aware of the daily contacts for the player, Santos are currently working to increase his price, as the Brazilian club believe the amount is below what the player is really worth. They know Rodrygo’s agents have been ‘moving’ around to listen to the European offers.

Sport even claims that Premier League sides would have problems getting him a work permit before he debuts for the national team. But if they do spend €50m to sign a youngster, he’ll easily pick up enough points to satisfy the FA procedure.

Rodrygo played for Santos against Nacional in the Copa Libertadores last night, and left the match with an ankle injury. He was having a personal duel against Uruguayan right-back Jorge Fucile, and after nutmegging the senior player a few times, he got hurt in a challenge in the middle of the second half.

Santos manager Jair Ventura had a say on the matter in the press conference after the game: “More than the defeat, my biggest concern was Rodrygo’s injury. He’s a jewel. It’s a pity that technique is stopped with violence. A lot of people criticise me when I preserve Rodrygo. The Libertadores teams mark stronger. They end up with violence. Let’s hope it’s nothing more serious. If we lose players because of violence, it hurts. It’s a pity.”

For the Manchester United fans who want to know more about Rodrygo, you can read the profile we wrote about him last week.