The Germany international’s new representative took charge of the 24-year-old’s file from the start of this month and they are now officially allowed to discuss their client’s future.

Bayern Munich have been credited with an interest in the wideman for more than a year, but in recent times, the likes of Real Madrid and Barcelona have also been linked with the player.

LIAN Sports managing director Damir Smoljan has given an interview to SportBild and provided an update on Sané’s situation.

“It is true that we now officially have the mandate as a consultant to Leroy Sané and can now hold talks,” Smoljan said.

“Together with him, we exchange ideas with Manchester City about what the next step could look like. The basic interest of FC Bayern is no secret. But other top clubs across Europe have already contacted us about Leroy.”

Sané’s contract at the Etihad runs down in 2021 and Smoljan’s comments make it clear a transfer is possible.

Meanwhile, the player man dreams of winning the Champions League. Should the former Schalke man decide to return to his homeland, he believes only a move to Bayern will help him fulfil his wish of winning Europe’s elite club competition.

“FC Bayern is the only club in Germany that Leroy can imagine as the next step in his career. There he sees the prerequisites for achieving his big goal of winning the Champions League,” Smoljan explained.

A handful of reports coming out of Germany suggested Sané’s character wouldn’t fit at Bayern. This has been dismissed by his new advisor. 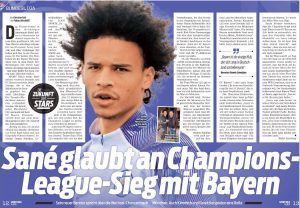 “I think it’s amazing how you can question Leroy’s character or mentality. You do him wrong for no reason. But, as I was assured, nobody at Bayern does that either,” Smoljan stressed.