The 18-year-old midfielder came up through the ranks of the Catalan club’s famous academy and made his first team debut in the Copa del Rey clash against UE Cornellà in January.

Since then, Ronald Koeman has handed him three more opportunities, two of which came in La Liga.

The young midfielder has less than 18 months left on his contract and is managed by ICM Stellar Group.

According to Cubero, Moriba’s representatives could move him away from the Spanish club as they are handling two ‘firm offers’ from Manchester United and RB Leipzig.

However, the youngster has no plans to leave the Camp Nou since he ‘doesn’t want to miss Koeman’s party’.

Moriba featured in Barca’s 3-0 win over Sevilla earlier this week and after the tie, the player thanked the former Everton manager for trusting him. 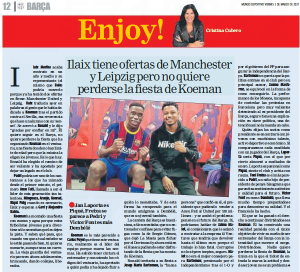 organised by the Dutchman in the dressing room, where there is ‘no age limit’.

‘Koeman has organised a party with juices and water because these young footballers just need to get off the track to have fun,’ says Cubero.

This report may not come as encouragement for both United and Leipzig who have, according to the claims, tabled offers for Moriba.