With Fabian Ruiz’s contract at Napoli running out next year and no renewal in sight, the player and the club find themselves at an awkward crossroads.

That’s because he could end up leaving on a free if nothing happens this summer, where Newcastle, Arsenal, Manchester United and Manchester City are all interested in his services.

Starting with the Magpies, the St James’ Park residents already made an attempt for the Spaniard in January, which was turned down by the Serie A side, but Corriere dello Sport claim Eddie Howe and his staff are ‘still interested’ in the midfielder.

Newcastle’s far better than anticipated finish in the Premier League does make them a far more attractive destination than over the winter, but with no European football on offer, all they can rely on right now is giving him better wages than the competition.

Arsenal, however, do have Europa League football on their side, and they, alongside Manchester United and Manchester City, have ‘collected information’ about the situation.

Over to the Red Devils, and everyone knows, thanks to Richard Arnold, that their prime target is Frenkie De Jong, but should that fail, the Spaniard could be a cheaper alternative. 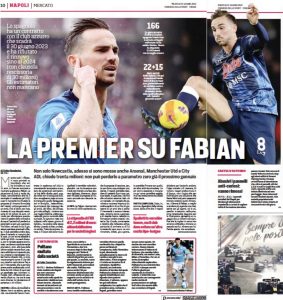 Corriere dello Sport explain that ‘the initial idea’ for Napoli is ‘to get €30m, maybe even €25m + €5m’, but they point out ‘it’s logical that to find a solution that makes everyone happy, it will be necessary to find specific meeting points’.

That’s a fee Manchester City, Manchester United, Arsenal and Newcastle can all afford, but it’s also worth pointing out that Pep Guardiola’s side have, like Napoli, Champions League football to offer next season.

The big question when it comes to a move to the Etihad for Ruiz is whether he will be a regular starter compared to, let’s say, a move to either Arsenal or Manchester United; two clubs who can pay him the money he wants and play him week in, week out.

There’s little worry that either of the four Premier League sides will struggle to reach terms with the player on the financial side of things, but the difficult part could be finding an agreement with Napoli.

Next up for Newcastle, Manchester City, Manchester United and Arsenal will be to sit down with Aurelio De Laurentiis and see if they can come to some sort of accord.