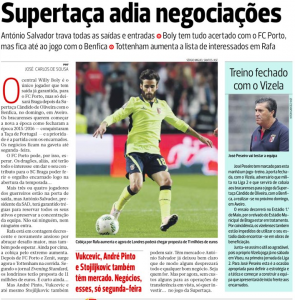 Tottenham’s interest in Rafa Silva is still being commented on in Portugal. The London Evening Standard’s article ended up being mentioned in most of the Portuguese sports newspapers, and now A Bola has a few additional details on what could happen next.

They don’t see to have any information if the Spurs’ interest is true or not, but in any case, the £10m bid mentioned by the Standard isn’t nearly enough to take the player from Braga, just like we said yesterday.

And if Tottenham are really going for it, they will have to wait for one more week. That’s because Braga are facing Benfica for the Portuguese Super Cup this weekend, and the president Antonio Salvador wants to keep his players focused on the match.

So that’s no ins or outs at Braga for a few days, then they can go back to the negotiations.

It’s very likely that Rafa leaves the club this summer, since there’s big competition for him. The player has already rejected a move to Zenit, and despite being said to have agreed a move to Porto, nothing has been sealed yet.

Manchester United, Liverpool, Arsenal and Leicester have all been linked to the attacker earlier this year, but no ones seems ready to pay the player’s €20m release clause.

Rafa Silva’s agent told Sport Witness earlier this year that a move to England was desired, and something which was being worked on.