Home Europe Young sensation has ‘offer on table’ from Liverpool, wants to join them,...
SHARE 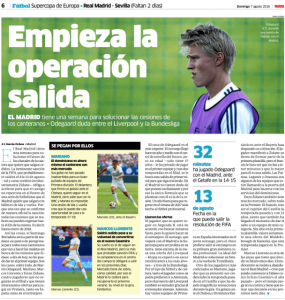 Earlier on Sunday we covered a report from Spanish newspaper AS, which explained the current situation of Martin Odegaard. AS claimed that Real Madrid have offers from Bayer Leverkusen and Wolfsburg, but Odegaard himself preferred Liverpool.

The 17 year old Norwegian had visited Melwood as part of his European tour when picking a club, and he’d been left very impressed. However, it didn’t say whether Liverpool were aware of Odegaard’s feelings, or had made an offer.

Well, Sunday’s edition of Marca says that Odegaard is in luck. It’s claimed Madrid have an ‘offer on the table’ from Liverpool. Unlike AS, Marca say the preference of Odegaard and his father is a move to Germany, but given that Jurgen Klopp is German it’s seen as a bonus.

Klopp is stated as crucial to any deal, because his record of helping young players. However, it has to be considered doubtful that Liverpool would happily take Odegaard on loan, turn him into the finished product, and then hand him back to Real Madrid.