Not for the first time, last week it was reported in Spain that Newcastle United will be ‘ready to negotiate’ the sale of Mikel Merino in the summer transfer window.

The midfielder has been repeatedly linked with a move to Athletic Club Bilbao, with him fitting their strict recruitment policy, but they missed out through dithering when Merino moved to Newcastle.

The youngster is continuing to grow in his role and has been speaking to Spanish newspaper AS about several topics. On his changing position, the Newcastle player explained he sees himself as more of a number 8 than a defensive midfielder, feeling bursting into the box and scoring is going to be a part of his game going forward.

But where will that game be played?

AS asked Merino if he wants to return to Spanish football: “Yes. I am very happy to be in the Premier League and have experience in the Bundesliga, but someday I would like to return to the Spanish League.”

That on its own isn’t as weighty as with the next two answers. 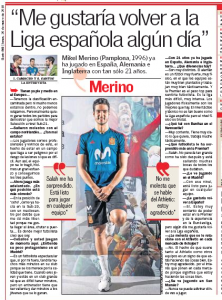 Asked if he’s annoyed about repeated Athletic rumours, the Newcastle player said: “I’m not. The fact that both Athletic and other teams are looking is a sign that you are doing things right. I am very grateful. for the interest they put in each market because it means that I’m doing things right.”

Then asked if he sees himself playing at San Mamés, Merino said: “You can never guess where you’re going to play.”

It’s not a come-and-get-me-plea, but it’s surely a hint a transfer could be on.