Over the weekend, Thomas Lemar spoke to the French media about almost leaving AS Monaco during the last summer transfer window.

Lemar was heavily linked to both Arsenal and Liverpool, but Monaco, having already seen several of their title winning team leave the club, weren’t keen on letting the player go.

It’s seems Lemar himself thought differently and he’s made it clear that a transfer was, and still is, something he’s considering.

Quoted by L’Equipe, the Monaco player said: “Regrets ? Maybe not. I was a little disappointed (not to have joined the Gunners). Once it’s over, it’s over, so I do not think about it. I keep working for these clubs to come back in the next transfer window. I am open to all offers. I am a football player, I like football. I do not close any door.” 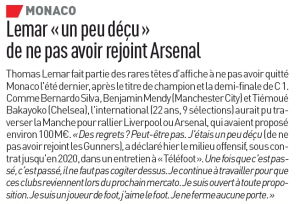 Interestingly, whilst others have taken the comments to be about Liverpool and Arsenal equally, L’Equipe mainly go with Arsene Wenger’s club. That’s the story for them, with Liverpool thrown in as an addition as opposed to an equal part of the story.

That may well suggest the French newspaper feel a move to Arsenal is more likely for Lemar.