Fulham have been linked with a multitude of goalkeepers this summer and now there’s another one to add to the list: Yassine Bounou.

Bounou, widely known as Bono, plays for Girona. The 27 year old is Morocco’s back-up goalkeeper and previously played for Atletico Madrid B and Zaragoza.

Fulham are said to have made an approach for the player, but it’s not good news.

Spanish newspaper AS report the Premier League club haven’t gone through with making an offer because Bono has told them he’s not interested and wants to continue at Girona. 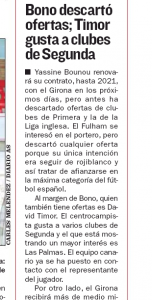 Money can of course change everything in football and Bono has been in talks over a renewal, with his contract ending in June 2019.

Fulham may well try to shake those talks up a bit, if their interest in the player is as real as AS present it.

It would be a strange one for the Spanish newspaper to pluck from thin air so there’s likely truth at some level.