Home Europe Tottenham star says he’s got ‘many beautiful years’ with Spurs ahead of...
SHARE

With a World Cup title added to his CV, Hugo Lloris could have, at the age of 31, decided it might be time to hang up his boots, at least internationally.

Few would hold it against him, allowing him to focus on his club career as he moves towards the latter stages of his time as a player.

He could even have started thinking about what to do after he decides to call it a day, but Tottenham and France fans will be happy to know that isn’t the case.

Travelling to Nice for his post World Cup winning tour, the Spurs goalkeeper was greeted by a few thousand fans, who all came to celebrate ‘their’ champion. 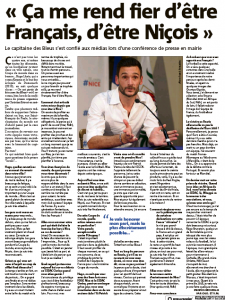 Giving a press conference in the town hall, Lloris was asked whether he’d one day consider ‘investing’ in one of his former sides, like Nice, and if their new manager, Patrick Vieira, had spoken to him before choosing to replace Lucien Favre in the south of France.

The Tottenham and France captain said: “I’m extremely happy to see Patrick in charge of OGC Nice. I appreciate him as a person so much. I had this chance to be around him when I first started with the national team. He’s a huge player, and huge personality.

“I think it’s a great opportunity for Nice and for him to prove himself. As for my reconversion, we’ll wait a bit more. I still have beautiful years with Tottenham and les Bleus ahead of me.”

Since his arrival from Lyon six years ago for what would be now considered a ‘measly’ £11.3m, Lloris has featured 254 times for Spurs, keeping 90 clean sheets along the way.

He started his career with Nice in 2005, before moving slightly further north in 2008 to Jean-Michel Aulas’ club.