Earlier on Thursday we covered a claim from Italy that Wolves could sign 21 year old Andrea Favilli from Juventus.

It was explained Jorge Mendes is in the middle of the potential move, and Juve could be set to make a quick and big profit.

The Turin club signed Favilli earlier this month for €7.5m and they now want €20m for the player.

That sounds strange, right? It gets stranger. Pisa-born Favili was originally in the Livorno youth system, not far from his home town, in 2015 he then went on loan to Juventus for a season.

After that Favilli went to Ascoli on loan, before moving there permanently last summer for €3m. He scored 5 goals in 12 Serie A games and 3 goals in 2 Coppa Italia matches, but he hasn’t played since November due to a cruciate ligament rupture. 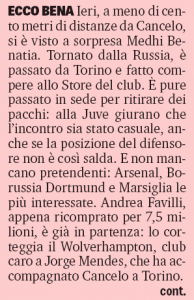 Gazzetta dello Sport back up the claims of Wolves interest, and given they will have gone to print last night they’re likely the first to report it.

The famous old Italian newspaper states Wolves are trying to ‘woo’ Favilli, a general transfer (so not just to Wolves) is consider likely.