Home Europe Sunderland have ‘reached an agreement’ to sell player, should be completed soon
SHARE

Wahbi Khazri remains a Sunderland player but that will soon change, according to a claim from the French media.

Today’s edition of L’Equipe claims the Tunisian international is edging closer towards completing a switch to Saint-Etienne. The Ligue 1 club’s manager Jean-Louis Gasset presented the club’s project to the forward.

Khazri is reportedly ‘interested in the challenge’ presented by Gasset and has agreed in principle to join Saint-Etienne.

L’Equipe also goes on to mention the French club and Sunderland have also ‘reached an agreement’ for the player’s transfer, but the report doesn’t mention the fee involved for the deal to take shape.

The 27-year-old is representing Tunisia at the 2018 World Cup. Following tdefeats at the hands off England and Belgium, the North African nation have already crashed out of the Fifa tournament in Russia, despite still having to play one more fixture against Panama. 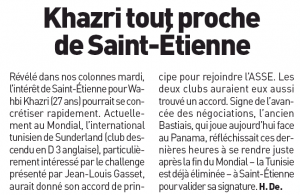 After finishing the World Cup with Tunisia, Khazri is expected to put pen to paper in order to complete a move to Saint-Etienne.

Khazri spent the 2017/18  season on loan at Rennes and played a part in helping them qualify for the Europa League. It is no secret that they want to sign him on a permanent deal, however, Saint-Etienne have managed to beat their league rivals in securing the Sunderland attacker’s signature.