Jorge Mendes has his fingers in a lot of football pies.

The Portuguese super agent and his Gestifute agency have a reach which extends beyond players they represent, often involved in transfers for others, and advising clubs on deals.

When it became clear just how much Fosun and Wolves were becoming involved with Mendes, it was a reason for optimism for many fans of the Championship club.

But many others, including a website not too far from here, voiced concerns. Look what had happened at Valencia, where the pairing of Mendes and Nuno Espirito Santo caused more harm than good and left a situation which owner Peter Lim stuttered through for a while.

It was a gamble, and one which has paid off for Wolves.

Further cementing their place at the top of the Championship on Wednesday evening, Wolves beat Leeds United 3-0 at Elland Road, outclassing their opponents.

It led Leeds United owner Andrea Radrizzani to have a Twitter rant. 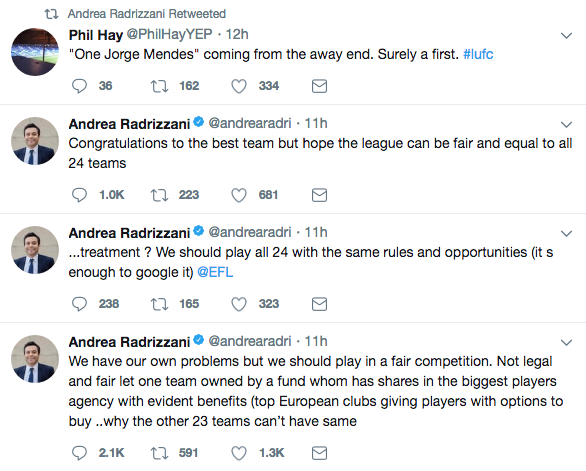 The insinuation is clearly that Wolves got players via Mendes who they wouldn’t have been able to sign otherwise, and perhaps that ‘top European clubs’ had been coerced into doing the club, and by extension Gestifute, favours.

Taking the highest profile signing, Ruben Neves, it was widely reported by the Portuguese media the midfielder was available for some time. Porto were desperate for money to meet a financial deadline and that’s how the deal was presented in Portugal, by those with the best understanding of the situation.

It led us to say at the time: ‘It would take some believing to judge the major reason for this deal is anything other than a fudge to help Porto’s finances… Neves must have been given assurances about a Wolves starting place, and it all could turn out fine. There’s every chance Neves will take the Championship by storm, and the circumstances of the deal be soon forgotten, but, equally, it could prove to be a Gestifute push too far.’

This wasn’t presented as Porto doing Wolves a favour, but quite the opposite, Neves hadn’t just stopped progressing but he’d regressed. Of course the agent relationship helped, as happens with many clubs, but it was a gamble.

Then there was Willy Boly, not represented by Gestifute, Man of the Match for many against Leeds United. Out of the picture at Porto, Boly was being heavily encouraged into a transfer, even told he wasn’t required to train.

The defender was ‘out of options’ at the time, according to Portuguese reports, and whilst a move to Wolves wasn’t the player’s dream scenario, he was talked into it by Nuno Espirito Santo, his former manager.

A permanent deal is in the offing for up to €12m, and there’s been claims that’s automatic upon promotion. Whilst that hasn’t been stated concretely in Portugal, it wouldn’t be a strange scenario, similar to what Leeds United had with Alfonso Pedraza last season, a player now having a good season at Alaves.

Roderick Miranda, represented by Gestifute, arrived from Rio Ave (undisclosed, widely put at around €3m) and Wolves didn’t have to fight off a queue of Europe’s biggest clubs for the player. The defender made it clear at the time that it was all part of a plan to get to the Premier League, seemingly with or without Wolves: “The Championship is one of the most competitive leagues in Europe and the largest player supplier of the English first-tier. All games are very closely watched, stadiums are full, so it’s not a setback.

“We have to be realistic: I would have less chance of playing in the Premier League if I played for Rio Ave.”

In January, Tobias Figueiredo was heavily linked in Portugal with a move to Leeds United, but instead went to Nottingham Forest where he’s enjoyed a promising start to his Championship career.

Radrizzani’s comment about ‘top European clubs giving players with options to buy’ could reference Boly in that Portuguese mix, but it hardly looked a Porto to Wolves favour.

It’s something Leeds have done themselves and perhaps a route they should have explored further. Getting Figueiredo from Sporting would have been one possible deal.

Diogo Jota was a prime Mendes signing for Wolves, with the Portuguese attacker represented by Gestifute, being owned by Atletico Madrid, and having spent the previous season at Porto.

Atletico wanted to loan him out again, but despite a reasonable season at Porto, there wasn’t a huge queue of clubs. Jota, just like Boly, had to be convinced of the Wolves project by Nuno, something repeatedly highlighted in Portugal.

That loan is set to be made permanent, with reported fees in Spain ranging from €8-22m, and the truth likely somewhere in the middle. But, again, it never seemed like Atletico doing Wolves a favour, and it’s worked for everyone.

Another loan from a ‘top European club’ is Ruben Vinagre, not with Gestifute, who arrived from Monaco having completely failed to breakthrough (largely due to his age), and has been another gamble which looks like paying off.

Alfred N’Diaye would be another loan moving into a permanent deal. Again not represented by Gestifute, the midfielder arrived from Villarreal as surplus to requirements at the Spanish club, spending the second half of last season at Hull City.

According to Spanish reports, Wolves have to make this loan a permanent transfer upon promotion, and N’Diaye will cost around €9m. Again this sounds very similar to the deal Leeds United had in place for Pedraza last season, also owned by Villarreal.

Leo Bonatini was a complete gamble signed from Saudi Arabia, with Mendes and his Gestifute team probably knowing the striker from his Estoril days, it’s hardly a big European club doing Wolves a favour.

The previous summer Ivan Cavaleiro signed from Monaco for around €8m, with the French principality club taking a big loss on what they paid Benfica. Helder Costa arrived from Benfica initially on loan, having also been on temporary spells at Monaco and Deportivo La Coruna, with Wolves making that deal permanent for €15m.

There can be no denying that Mendes’ fingerprints are all over Wolves’ transfer business, the recruitment from Portugal and continual popping up of Monaco shows that, but that doesn’t necessarily equate to something dodgy coming from the Wolves end.

Like with Monaco and Valencia before them, it’s often seemed that Gestifute have pushed the players towards Wolves, who have accepted the gambles. Whilst there’s time for everything to become more unsavoury, it’s just a different way of doing things.

Wolves and Fosun sold their transfer soul to Mendes and it could have seen them burn in transfer hell, but it hasn’t.

Over at Leeds United there’s been deals which are perhaps more eyebrow raising. Ouasim Bouy is something of a mystery, and the whole Cultural Leonesa and Aspire relationship probably deserves more spotlight than Leeds United’s closest media have been prepared to give it.

Signing up talents from relatively obscure destinations with the hope an Elland Road football factory can then see big transfer profits hasn’t yet borne fruit. So many clubs think they can play the Football Manager game, but so few actually do it well.

Mendes’ potentially unrivalled contacts book and agency has been the driver of Wolves’ recruitment, whereas at Elland Road it’s been Victor Orta and his own continual transfer gambles.

Of course, the costlier a player the likelier he’ll be quality, but it also makes the gamble bigger. Wolves’ gambles have paid off, Leeds’ gambles haven’t, with the latter also selling some key players last summer, something Radrizzani can’t place at the competition’s door.

Another big factor in Wolves success is the atmosphere within the squad, with recruits often speaking to the media and explaining just what a family it is and how happy they are under Nuno.

Nuno himself is a huge Mendes link, with the former goalkeeper being the agent’s first client. Wolves had been determined to recruit a big name, an experienced manager who could attract players to the Championship, and had even been linked with Julen Lopetegui before he got the Spain job.

Leeds took on Thomas Christiansen, who few had ever heard of, and then replaced him with Paul Heckingbottom, again always looking for the low-cost-potential-gem angle. Is it likely top young European talents would be especially attracted to play for either? No.

It’s fair to say Wolves have enjoyed far more investment that Leeds United, and it will likely lead to the two grand old clubs of English football being in different divisions next season. But that, and whatever Mendes conspiracy Radrizzani thinks is afoot, isn’t the only difference.