Wolverhampton Wanderers’ chase for Braga defender David Carmo is starting to be taken very seriously by the Portuguese media.

Claiming that Wolves are the ‘latest’ club to join the race for the 22-year-old, newspaper O Jogo brings some updates about the pursuit.

It’s claimed that the Molineux side were, at first, interested in Sporting defender Gonçalo Inácio, but they were blocked by the price demanded by the Lions, who are only letting him go for €45m.

So Carmo showed up as an alternative for Bruno Lage, who looks for a replacement for Romain Saiss this summer. It’s said the Braga player ‘fulfils the demanded requirements’ from the manager. 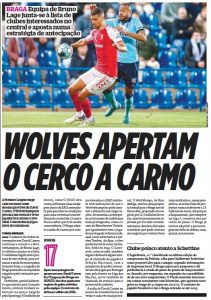 Wolves may be worried about big competition for Carmo, but O Jogo makes it clear that the Molineux side could ‘take the lead’ in the negotiations and overcome the likes of Liverpool and Manchester United, who’ve also been interested in him.

In Germany, it’s even reported that the player is too expensive for Wolfsburg, with Bild claiming a €13m bid was rejected by Braga.

O Jogo writes that the Portuguese club will not negotiate Carmo’s exit for less than €25m. It’s said Wolves already made an approach for the signing and are now aware of the conditions for a summer deal.