With 32 goals in 69 games for Wolverhampton Wanderers, Raúl Jiménez has been one of the great success stories of the past couple of Premier League seasons.

Originally brought in on loan from Atlético Madrid, the Mexican impressed so much when he first arrived that Wolves didn’t hesitate to trigger the £34m clause to make the move permanent in April and ensure his future at Molineux.

Continuing his fine form into the 2019/20 campaign, the 28-year-old has 15 goals to his name in all competitions already, and Marca claim he could be off in the summer.

The Spanish newspaper explain Jorge Mendes, his agent, ‘is already reviewing offers for next summer’ and ‘everything indicates the zeroes will roll in that possible transfer’.

However, their belief is he won’t have to travel very far, since they reveal he will likely move within the Premier League, which is ‘prone to inbreeding’ as clubs look closer to home to find their next targets.

For example, Javier Aguirre, currently manager at Leganés, sees him in a top six club, or at Arsenal… 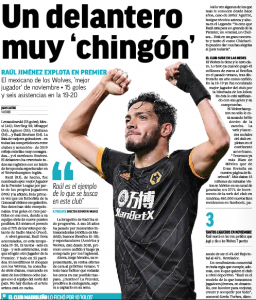 He said: “I believe that Raúl is a player for a great team in the Premier League, an Arsenal, a Chelsea… He’s in a great moment and both he and Chicharito can give the country many joys yet”.

Regardless of who comes forward, they will have to pay up, and we all know Wolves, with their backing, the TV and European money coming in, won’t need to sell in the summer.

It won’t be a record breaking transfer, but it’ll be a very expensive one, and Jorge Mendes is probably rubbing his hands in glee at the prospect of potentially filling his already brimming bank account a little more next summer.