Fotospor claim Fenerbahce will make a final attempt to sign Mesut Ozil from Arsenal during the January transfer window.

In the past few months the Turkish side have been linked with a move for the Arsenal attacking midfielder, and Fotospor claim Ozil is currently considering Fenerbahce’s offer.

Despite the sacking of Unai Emery, the Turkish media are adamant that Ozil will leave Arsenal in the near future, and Fenerbahce could be a destination for him.

It’s reported he’s bought a house in Istanbul and that may be an indication he could be heading to the Super Lig with Fener.

The 31 year old has made only five Premier League appearances for Arsenal this season, but his future may well depend on who the Gunners will appoint to replace Emery. 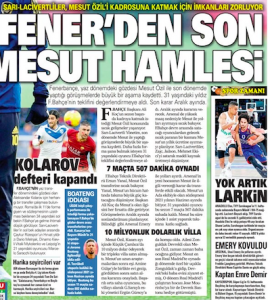 There have also been reports the former Germany international could be heading to MLS.

His contract with the London side will expire at the end of June 2022, but there’s a chance he may leave before that.