It’s columnist Rui Dias who highlights the striker, talking about the great form he’s been having at the Premier League side.

The story first gives a shout to Nuno Espírito Santo, saying the Portuguese manager has all the merits for getting the best from all of his players at the Molineux side.

When speaking of Diogo Jota, it’s said he’s ‘added technical and tactic elements’ since playing under the manager, making him a better attacking player overall. 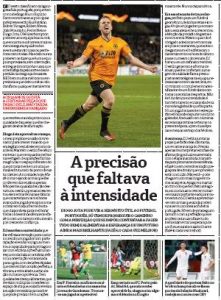 It’s said that Jota “refined the goal orientation, with quick decisions that reveal perfect vision, technique, speed, motor articulation and power. He has unbalancing qualities, which reveal multiple connections in the space of the attack, and it also reveals the necessary intuition to know that you may need ammunition later. Never shoots for nothing.”

It’s recalled that Jota started well at Paços de Ferreira, but only had lapses at Porto, with Atletico Madrid not taking the best of him during his loan in Spain. Now with his good form at Wolves, it’s said he could become an important man for Portuguese football and the national team.

Rui Dias finishes his story saying Costa should never be satisfied with the level he’s at, because as long as he believes he’s still in a process of development, he’ll reach a ‘brilliant future’, making him a ‘huge striker’.