The summer which will be lived by Sporting midfielder Matheus Nunes is today detailed by Portuguese newspaper Record, who explain the 23-year-old’s situation in Lisbon.

The outlet claims that following a very good season with the Lions, he’s now waiting for Portugal manager Fernando Santos to keep him in the national team squad which will soon be called up for the Nations League.

And regarding the clubs which should come for him this summer, we get to see Wolverhampton Wanderers named as one of the interested sides. But it still doesn’t mean the midfielder is keen on a move to Bruno Lage’s side.

A Bola explain that Nunes is not focused on his departure from Sporting. He’s only interested in changing sides this summer in case he moves to a club who can fight for domestic and European titles. Otherwise, he’d rather stay in Lisbon. 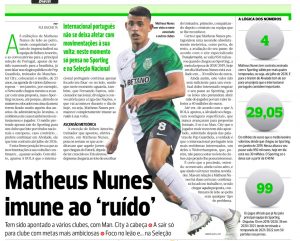 So A Bola recalls that when Newcastle United went for his signing in January, the Magpies couldn’t even convince Sporting with their bid, and Nunes himself wasn’t excited about the move either.

And now, even though Manchester City are the club most linked to him, the newspaper points out there are other interested clubs, with Wolves being one of them.

Still, the Molineux side face that same situation as Newcastle. It’s said Bruno Lage’s side ‘don’t seem to be in the lot of clubs whose project may interest him’.

So as Sporting demand €40m to sell Nunes this summer, it seems it’s not only money that will make this deal possible. The clubs in the pursuit must make sure they bring convincing arguments to attract the player as well.