Wolverhampton Wanderers are keen on a move for Porto’s Jesús Corona after his impressive performances for the Portuguese side this season.

The Mexican forward has been in scintillating form this year, with four goals and 18 assists in 48 games in all competitions.

This has earned him attention around Europe, with several sides in the Premier League all thought to be contemplating a move.

Wolves are among them and, according to A Bola, are now ready to step up that interest to secure his signature.

The newspaper reports that Corona’s form has brought ‘immense attention’ from Europe and, ‘in particular’ Wolves.

Nuno Espirito Santo knows the player well having worked with him when he was Porto coach in 2016/17, with Corona playing in 41 of the 49 games that year.

Thus, ‘no-one is surprised’ by Wolves apparent interest, with it stated the Portuguese coach ‘sends in the wolves’ to secure his signature. 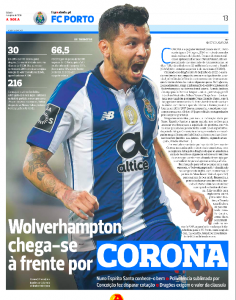 Porto would naturally like to keep him for another year but will demand any club matches his €30m release clause if they are to take him away.

Neither of those have been enough to ‘scare away’ his suitors, particularly Wolves, who have money to spend and ‘seem to be in good financial health’.

Indeed, they are at the point where they are planning a ‘joint onslaught‘ so that they can finalise a deal for Corona this summer.