Adama Traore failed to cement a place in Barcelona’s first team, or come close to it, after spending a decade with the Catalan club’s academy.

The 22-year-old left the La Liga winners and joined Aston Villa in 2015, only for him to leave them and make a switch to Middlesbrough a year later.

Having managed to impress for Boro during his two-year spell, Wolverhampton Wanderers acquired his services earlier in the summer transfer window.

He came off the bench to score the winner for his side in the stoppage time against West Ham United on Septmeber 1st, and Mundo Deportivo have a story in today’s edition of the newspaper regarding the Wolves’ record signing.

The Catalan publication mentions how the player has transformed from a player who was simply quick to a ‘bomb’, after overcoming muscle problems and claims his ‘physical transformation has been remarkable’. 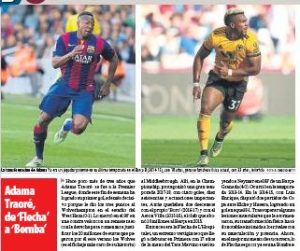 Mundo also mentions that Adama ‘intimidates’ opponents and is enjoying the best moments of his career so far, kicking on with his transfer to Wolves.