Home Europe Wolves official in Lisbon at the weekend – Nuno could be planning...
SHARE

During the summer transfer window, Wolves were repeatedly linked with another swoop on Benfica, having signed Raul Jimenez from the club a year earlier.

The Lisbon side were looking for big bucks for Jimenez, but the Mexican’s form and goalscoring record simply didn’t justify it.

A loan move with a purchase option worked very well for everyone involved, so there’s likely to be a lot of good feeling.

At the weekend, the Premier League club had an official watch Benfica as they beat Maritimo 4-0, reports A Bola. Ruben Dias, one of the players linked during the summer, had a good game, yet his transfer to Nuno Espirito Santo’s side now looks even less likely.

On Friday, Benfica announced the defender’s renewal, and his release clause has increased to €100m. Gedson Fernandes, a 20 year old midfielder and the other player linked with 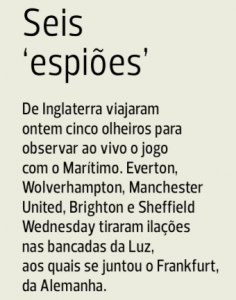 Wolves, wasn’t in the squad.

Right back Andre Almeida and right-sided midfielder Pizzi were the best performers, however, they’re aged 29 and 30 years of age respectively.