Wolverhampton Wanderers will soon use their buying option and sign Raul Jimenez from Benfica on a permanent deal, according to the Protuguese press today.

Newspaper Record brings a story saying Wolves are about to pay €38m for the striker’s acquisition, which will be added to the €3m spent on the loan deal.

Despite being sure that the Premier League side will activate the buying option, Record doesn’t really seem to know when it will be done, as they only refer to it as ‘soon’.

Jimenez has 14 goals and seven assists in 34 matches for Wolves this season, having scored this weekend against Chelsea at the Stamford Bridge. 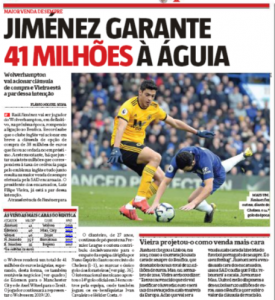 Record also recalls that back in 2015, club president Luís Felipe Vieira said Jimenez could be Benfica’s biggest sale ever.

Now with a total of €41m, the striker would be more expensive than Ederson and Axel Witsel, who were both sold for €40m.

We must say we had some disbelief at the time of those claims, and it’s time to again state: Portuguese clubs know how to sell their players.