This seems to be another summer where Wolverhampton Wanderers will continue being linked to countless players from the Portuguese league, and a new one is added to that list today.

According to newspaper O Jogo, Wolves are one of the clubs who are interested in signing Braga midfielder Almoatasembellah Al Musrati.

Once again, it’s claimed the Molineux side are getting prepared in case they lose Ruben Neves, as he’s been linked to several European giants lately.

So O Jogo writes that Al Musrati is one of the players being considered by Wolves, with Braga already becoming aware of their interest. 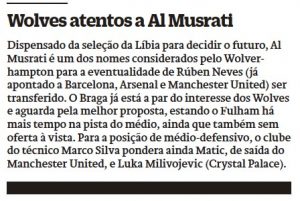 The Portuguese side are now said to be waiting for the ‘best offer’ for Al Musrati, who was recently released from Libya’s national team camp to sort out his future.

It’s actually Fulham who have been linked to the player for longer, but as said by O Jogo, they haven’t placed their bid yet. So there’s still time for Wolves to show up and try to get to a deal.