As Wolves continue to get some big attention from Portuguese press, it’s the club’s fans who are now highlighted by newspaper O Jogo.

With Ivan Cavaleiro being linked to Huddersfield Town over the weekend, Wolves fans reacted to the rumour by asking for the player to stay, and that was enough for a story in the newspaper.

It may not sound like a big deal, but still, O Jogo gave it almost an entire page of their international section on Monday.

They show how loved Cavaleiro is at the Premier League side, and display his statistics to show his numbers were only surpassed by Diogo Jota and Leo Bonatini in the last season. 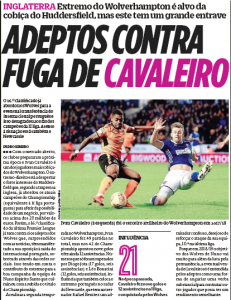 O Jogo also writes that Newcastle United would be interested in Cavaleiro. But once again, it sounds like a mistranslated story from HITC, since the website recently suggested the Magpies move for the player.

With the local papers always giving Wolves a mention due to the number of Portuguese players, it’s safe to say that O Jogo don’t want Cavaleiro gone either.

They take some pride in how the fans reacted, and with Rui Patricio now joining his compatriot, the attention is only going to grow.