Lapa joined Wolves as part of Nuno Espírito Santo’s technical staff two years ago. His department, headed by Antonio Dias, is proud that the squad only had five injuries this season. And he remembers all of them.

Lapa was asked if for medical staff, having few injuries is the equivalent of a striker scoring goals. He agrees with it.

“No doubt! Just the other day I met a friend on the street who had seen the chart of the injuries, and he told me that that was my league table, he didn’t even want to know about the goals (laughs). It even turns out to be true, but of course the team’s success is what counts. If we won the league and had 20 injuries, I’d prefer the championship, but it’s certainly a source of satisfaction.” 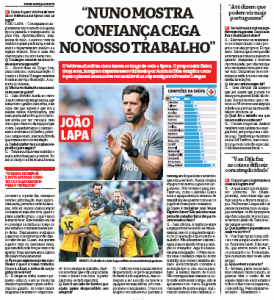 “The relationship between the technical and medical team is fundamental, but it’s only with a great spirit of cooperation that one has results. There’s no point in having an idea if it’s not accepted by the coach. This connection was fundamental here. Nuno shows a blind trust in our work and this is halfway through. He was very happy and, at the end of the season, he congratulated us. It’s really everyone’s merit. You can’t do anything if the others are not with you, if they don’t support you and vice versa. It’s the great advantage of our team. We apply the method and there’s trust.”

With so many Portuguese players and staff members, Lapa was asked how fans react to having so many people from a foreign country being involved in the club. 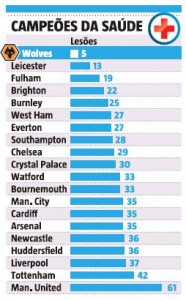 “There are supporters who even say that more Portuguese can come! They’re so happy. It seems that the success of Wolves brought joy to the city and the people on the street are happy. This is noted.”

Record’s table of injuries in the Premier League shows Wolverhampton in the lead, with only five.

They’re followed by Leicester City, with 13, and Fulham, with 19. The club with most injuries this season was Manchester United, with 61.