Home Europe Tottenham have made ‘only firm offer’ for player so far – Club...
SHARE

On May 25th, we covered two stories from the Seville based media about Tottenham interest in Giovani Lo Celso.

AS stated Spurs were ‘already negotiating’ to sign the Real Betis midfielder, and ‘willing to pay €60m’ for the player, something which had been reported before.

Diario de Sevilla ran a similar story, stating Tottenham ‘have put €60m on the table’, and explained that came from their own information.

Both articles also covered claims about interest in Betis’ Junior Firpo, and it seemed pretty likely that it was the Spanish club behind the stories.

Things have largely gone quiet since. The above claims have been pushed around Europe, but there’s not really been any advance back at the source.

Today’s edition of Diario de Sevilla says Christian Eriksen’s exit would make room for Lo Celso. That doesn’t mean a lot, but they do point out Tottenham have made the ‘only firm offer’ for the Argentine… standing at the €60m previously claimed.

There’s an insistence of interest from elsewhere, but potential competitors aren’t named. So there’s no other offer, and likely no other approaches at this stage.

Suggestions that Betis would ask for the full €100m of Lo Celso’s clause never seemed realistic, and Diario de Sevilla explains the club gave him such a high buyout to help in future negotiations, like this one with Tottenham. 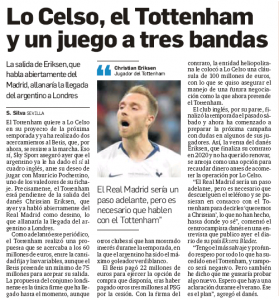 It must be assumed Betis are considering a sale, otherwise pushing information out about a Spurs offer, and other interest, wouldn’t make a great deal of sense. The plan was likely to tempt someone to offer more than the €60m, or pressure Daniel Levy into edging higher to beat others.

So far it hasn’t worked, and perhaps Tottenham have confidence they can do the deal for an amount they find reasonable.

It’s stated Betis are trying to ‘resist’ Spurs, which could suggest that €60m offer is tempting, despite them wanting more.