Remember when Leonardo Bonucci swapped Juventus for Milan? Well, Merih Demiral could be the next player to do that very same trip if Gazzetta dello Sport are to be believed.

The interest from the San Siro club isn’t new, as they wanted him before he moved to Turin, and with a desire for a new centre-back, they have targeted the Turkey international.

The problem is, they can’t afford him at the moment, so they might have to sell, which is where Wolverhampton Wanderers come in.

Kessié is going to be linked with a move to Wolves until he retires, and given he’s only 22 years of age, that’s a lot of stories to look forward to.

On deadline day of the summer window, Italy’s SportMediaSet (founded and run by the Berlusconi family, who have strong AC Milan links) reported Wolves had agreed a fee to buy the player.

The amount was put at €25m plus a further €3m in potential bonus payments, however, they hadn’t agreed terms with the midfielder.

Kessié stayed where he was and the rumours have continued since then.

Repeatedly the price has been put at around €30m, with some claims going as high as €35m, but what Milan are fishing for and what is possible are likely to be two very different things. 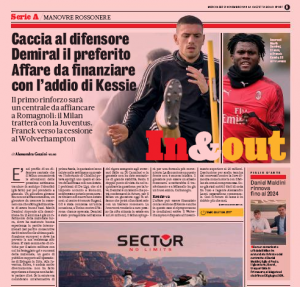 According to Gazzetta dello Sport, the Ivorian’s sale could help finance the move for Demiral, and it’s stated Wolves are ‘ready to invest more than €20m’ on his services.

That’s a much more realistic amount, given Milan’s eagerness to negotiate a sale.

This comes after Kessié was excluded from the squad to face Juventus at the weekend, and there’s a wide belief the defensive midfielder’s future in Milan is in serious jeopardy.

So, despite not being entirely sold on a move to Molineux last time they tried to sign him, Wolverhampton might end up becoming more and more attractive by the day at this rate for the player.