Home Europe Wolverhampton have midfielder as ‘priority target’ – Could offer player to get...
SHARE

The outlet writes that the player has become a ‘priority target’ for the Molineux side this summer, as they’re working to have him in Bruno Lage’s squad for the next season.

The biggest difficulty Wolves are having seems to be Palhinha’s price. A Bola claims that Sporting value the player at €30m and do not want to negotiate for less than that.

There’s no information on any bids or talks so far, even though it’s pointed out that Wolves may have a solution to pay less for the transfer. 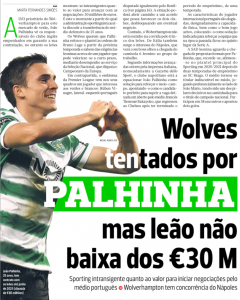 A Bola recalls that Sporting are interested in the signing of Wolves fullback Ruben Vinagre, who spent the last season on loan at Portuguese side Famalicão.

Now the Premier League club could send him to Sporting and get a discount for Palhinha.

Claims from Italy are also added to show that Bruno Lage’s side aren’t alone in the race for the midfielder, as Napoli seem to be interested as well, which is another reason why the Lisbon side will keep playing hardball when negotiating for his move.