Raul Jiménez could leave Wolverhampton Wanderers this summer and Juventus are among his admirers.

That’s according to Tuttosport, who say the Mexican striker is on Juve’s list of targets as they hunt for someone to partner Cristiano Ronaldo.

Jiménez is a player who has come to their attention after bagging 22 goals and ten assists in all competitions for Wolves this season.

The Serie A side see the striker as an ideal replacement for Mario Mandzukic, the belief being that while he may lack some of the ‘class’ the Croatian has, he is also without some of his worse ‘character traits’.

According to the newspaper, no fewer than 11 clubs have made their interest known and Wolves are open to a sale and already thinking about how they can reinvest the money.

That’s one problem for Juventus, with another, and more significant, being Wolves’ asking price for the striker. 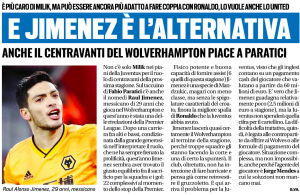 They have apparently put a €60m price tag on his head, a fee that Juve simply ‘won’t spend’ on him but Jorge Mendes could end up helping them out.

It’s well known he has plenty of influence at Molineux and while the situation is ‘complex’ it’s not ‘impossible’ because with the Portuguese agent, ‘solutions never fail’. 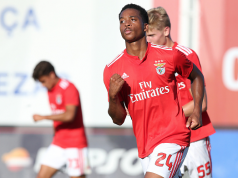 Manchester United get mixed messages over signing – €100m the aim...