Edinson Cavani’s future continues to be up in the air, and that means he’ll continue to be linked with a move to Manchester United.

The 33 year old’s contract at PSG expires at the end of June and he’s of interest to several clubs. Sunday’s edition of L’Equipe reports Inter Milan, Newcastle United, Manchester United and Atletico Madrid are in the picture as potential destinations.

Cavani will not ‘rule out’ moving to Old Trafford, and the same goes for other options on the table. The French newspaper states Manchester United have been interested since January, which makes some sense given their search for a striker at the time.

PSG priced Cavani out of a move in the winter market, with it being reported at the time they asked Atletico Madrid for as much as €30m to sign the Uruguayan. The failure of that transfer reportedly angered Cavani, and it may well be that he’d prefer Atletico should they make another attempt this summer. 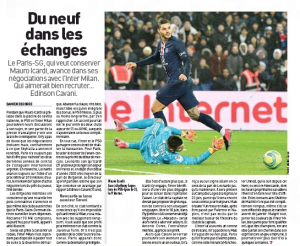 Manchester United need to decide what to do regarding Odion Ighalo, and whether they even need a new striker given Marcus Rashford will be fit for the start of next season.

If they do want to sign a short term option, and if Cavani would accept a short contract, then he could be a solution.