Home Premier League “It will always move you” – Southampton player pleased with call from...
SHARE

Southampton owned striker Guido Carrillo on Wednesday night spoke to the Argentine media about his future.

The 29-year-old, who’s currently having a loan spell at Spanish side Leganés, was interviewed by Fox Sports, and was very much quizzed about possible interest from Boca Juniors in him.

“My idea is to stay here in Europe, but if they call you from Boca, they will move you at any time. Making the decision isn’t easy, but I didn’t close the door on anything,” Carrillo told Fox Sports.

“I still have things to give here, I wouldn’t hold myself back, but you have to be prepared for everything. I always talk to Raul, I have a good relationship.” 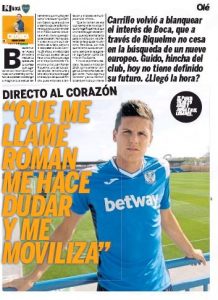 With Juan Roman Riquelme being one of the biggest legends in Boca Juniors’ history, they asked him what would happen if the club vice-president called him.

“Roman called me a few months ago and they are situations that make you doubt a lot.

“That someone who represents so much for Boca calls you is different. As much as Román or anyone from Boca calls you, it will always move you.”

The quotes are also brought by Argentine newspaper Olé today. They highlight the story on their front page.

What’s interesting is that both Fox Sports and Olé have something in common: they don’t even mention Southampton in their stories.

Signed by the Saints on a €22m deal from Monaco in January 2018, Carrillo has only made ten appearances for the Premier League side. He was sent to Spain only six months after his signing, and perhaps won’t be returning to England at all.