Last summer West Ham were linked with Anthony Modeste, and the story has popped up several times since then. Given West Ham’s struggles with the strikers they did sign, and Modeste’s 25 FC Koln goals so far this season, it’s an option they probably should have taken up.

Now Modeste would cost more than he would have last summer, with Germany’s SportBild believing FC Koln would be looking for something between €30m and €40m for the player.

That’s certainly doable for West Ham, and SportBild name them as an interested club, along with Nice and Marseille. 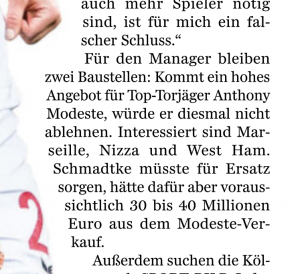 Despite Slaven Bilic being keen on the player, and SportBild’s claim of that interest remaining, West Ham could feel the price is too high.

It’s certainly not out of the club’s range, but Modeste turning 29 years of age this month makes €30m+ seem even bigger.

West Ham will likely again be looking to add upfront this summer, and Modeste is a reasonable target.