In need of a new central midfielder to cover the hole left by Jack Wilshere’s latest injury troubles, West Ham are scouring the European scene to find the right man for the job.

Their latest excursion has taken them to Italy, where Gazzetta dello Sport explain they travelled on Sunday to San Siro to watch Nahitan Nández.

It’s revealed the Hammers wanted to take a closer look at the Cagliari midfielder, who joined the Serie A side in the summer for £16m, before potentially making a move in the final days of the January transfer window.

Gazzetta point out that if they did come forward with an offer, they ‘could think of a loan offer with an obligation to buy’, which would have to be around €30m to convince Tommaso Giulini, the Serie A club’s president, of agreeing a ‘sudden last minute’ deal. 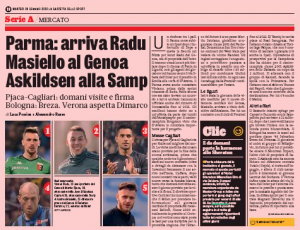 If that doesn’t happen, then it’s believed enquiries from the Premier League will continue for the Uruguay international regarding a move in the summer.

Since the start of the season, Nández has made 23 appearances in all competitions for Cagliari, scoring one goal and assisting another four.