Real Sociedad have not heard from Tottenham for five days as they wait to see if the Premier League side will up their bid for the striker.

Spurs have identified the Brazilian striker as a potential signing as they look for a replacement for Harry Kane, who is out injured with a hamstring injury.

They have already seen a bid rejected by Real Sociedad, who want at least €30m for their striker, who has a €70m release clause in his contract.

Diario Vasco provide an update on the situation today and say there has not been any contact between Tottenham and Real Sociedad for the last five days.

According to the newspaper, Spurs made their initial offer of €15m ten days ago, and they are yet to move from that bid, instead preferring to wait and see ‘how the market evolves’ in the final week.

However, as La Real only own 70% of the player, that would see them only make around €10m, a fee that they consider far from his real value. 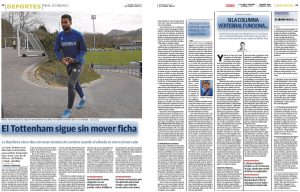 As much as Real Sociedad are ‘willing to accommodate’ the player, ‘no deal is possible’ at those amounts. There are, then, two solutions to the issue.

Either Tottenham up their bid to one Real Sociedad find acceptable, which they haven’t shown any sign of doing just yet, or Willian José, his agents and former club Maldonado, who own 30%, all give up their slice of the cake.

If that were to happen, Sociedad would receive a higher amount, although predictably, nobody is very keen on going down that route.