As the Portuguese media is back covering Jovane Cabral’s situation at Sporting, they must point out the interest from Premier League clubs in signing him.

Newspaper A Bola has a story today saying the Lions are holding a new round of negotiations to renew his contract, even though a deal is still far from happening.

Then the outlet claims that Jovane is still a focus for a few clubs, especially from England, where Southampton and West Ham remain interested in him.

The Hammers’ chase is more well known, since they made a bid to sign the winger in the last transfer window, and the amount put on the table wasn’t enough to take him from Sporting. 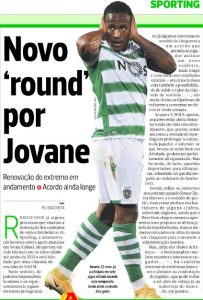 In the Saints’ case, all A Bola has to say is that the club ‘keep’ their interest in the player, just like French and German sides as well.

The newspaper points out that there could be new attempts to sign Jovane in the January transfer window. He’s currently protected by a release clause of €40m, and it isn’t said how much the Lions would demand for his move.

The winger has two goals and one assist in seven appearances this season.