With some less than desirable results sprinkled throughout some fine performances, Manchester United are having what many would consider a rollercoaster of a season.

Capable of both beating RB Leipzig 5-0 and losing to Crystal Palace 3-1, Ole Gunnar Solskjaer’s men have struggled for consistency, which doesn’t reflect particularly well on their Norwegian manager.

Despite not being under threat just yet, the former striker’s job at the helm of the Old Trafford club is being discussed, with rumours of both Mauricio Pochettino and Max Allegri being looked at in case things don’t turn around for the better.

However, if Tuttosport are to be believed, those two aren’t the only names on the shortlist, with Italy and former Manchester City manager Roberto Mancini also being considered.

The Italian newspaper explain many clubs have been impressed with his work with the national team, and Juventus were the first to enquire before going for Andrea Pirlo.

And now, ‘for some time, suggestions have been coming from Paris Saint-Germain and lately from Manchester, this time from the United side’. 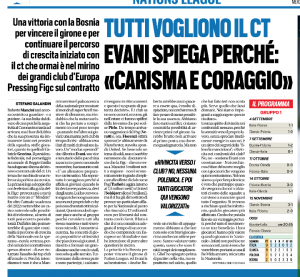 It’s not a matter of money, as Tuttosport make it very clear that if it were, he’d be long gone, earning just €3m/year in his current role, while they say Thomas Tuchel and Ole Gunnar Solskjaer pocket €7.5m/year and €9m/year respectively.

What is stopping him is ‘the manager has already shown he has a particular affection for the national team’ and ‘now considers the timing of an agreement that includes a Euros and a World Cup to be adequate’.

Therefore, it appears both Paris Saint-Germain and Manchester United will need to look elsewhere.