Munir El Haddadi will turn 22 years of age on September 1st, and Barcelona hope the close of the transfer window will also bring a new club for the youngster.

In September 2014, rather than settling in at a new club, Munir was making his debut for Spain, with the country’s football association keen to tie the player down and stop him representing Morocco. No further international appearances have followed and Munir looks a long way from being in contention.

Catalan newspaper Mundo Deportivo report that Everton have asked about signing the player, but it’s West Ham, Southampton, and Crystal Palace who have shown the ‘most interest’.

Quite how West Ham, Southampton, and Crystal Palace have shown that interest isn’t explained, and they’re not the only ones interested. 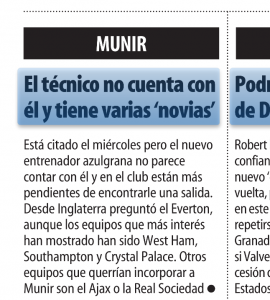 Ajax and Real Sociedad are also said to be keen on the Barcelona player, who spent last season at Valencia on loan.

Repeatedly linked with a move to the Premier League there’s been nothing especially strong in any of the claims.

West Ham have perhaps been linked the most, followed by Southampton and Crystal Palace.

If any of them seriously want to make a move, they should find Barcelona to be receptive.