On Tuesday morning, Portuguese newspaper O Jogo had a story saying West Ham United would still try to unblock the signing of Porto fullback Zaidu Sanusi before the transfer deadline.

Since it didn’t happen, the outlet is back today with a story explaining why the Hammers were not able to take the 24-year-old from the Dragons.

O Jogo writes that following their story in the morning, the move was back to being considered by West Ham during the day.

However, the club didn’t take action because of the ‘significant investment’ they’d have to make.

It’s said Zaidu became ‘too expensive’ for the London side, who already spent €72m in the transfer window and only had an income of €3m. 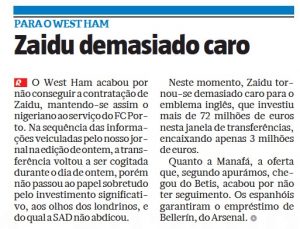 The issue here is that Record still doesn’t say what Zaidu’s price would be.

They didn’t mention it yesterday and remain silent about it today as well.

The player is valued by Transfermarkt at €8m, and according to other reports from Portugal, he has a release clause of €50m, so perhaps that’s what Porto wanted to let their man go.