Newspaper Record says the Hammers have until the end of the day to ‘unblock’ the transfer which has been rumoured for the past weeks.

The outlet confirms there have been contacts for the move in the past few days, with the London side leading the race.

West Ham have shown their intention to formalise their bid, and according to Record, Porto have the ‘expectation’ of receiving the offer today. 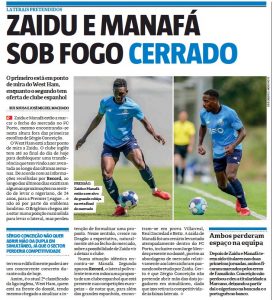 The Hammers, however, haven’t been alone in the competition.

Record doesn’t say how much West Ham would pay for Zaidu.

The left-back is valued by Transfermarkt at €8m, although we all know Porto would demand a lot more if selling the player to a club from the Premier League.