A report from Mundo Deportivo on Tuesday claimed West Ham United have made an offer for Barcelona midfielder Andre Gomes and it’s the ‘most serious’ proposal received by the Blaugrana.

The report also mentioned the Hammers’ offer didn’t convince the Spanish champions. The Portuguese international, who is currently recovering from the hamstring injury he picked up last month, is aware he has no future at Camp Nou and had already asked to leave the club.

Another Catalan newspaper, Sport, now claims Ernesto Valverde’s side negotiated the 25-year-old’s departure on Tuesday, and they talk about the approach from Manuel Pellegrini’s side.

The Premier League outfit prefers to ‘formalise’ the transfer by taking him on loan with an option to buy, but Sport says there’s still the possibility the option could be turned into an obligation. Today is going to be a ‘key day’ to know if the deal can be completed or not. 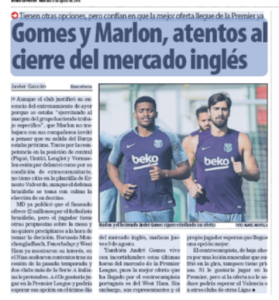 There’s no mention of any loan fee from West Ham or amount to make the deal permanent.

Whilst Gomes has been the subject of countless rumours, the Catalan media clearly believe the Hammers are the likeliest destination right now.