Just under a week ago, Sport Witness covered claims from France about West Ham’s Ryad Boudebouz. The Hammers, like other English clubs including Newcastle United, have been repeatedly linked with Boudebouz, but his €15m price-tag is causing issues.

Montpellier demanding €15m has put several clubs off, and West Ham and Newcastle are yet to make their move. Boudebouz has been assured he can leave Montpellier this summer, but the French club are determined to get every penny they can from the potential deal.

The asking price has surprised some, maybe the player himself, but interest continues to build. Monday’s edition of Marca credits Real Betis with a serious interest, and mentions competition from West Ham and Newcastle United.

If West Ham are baulking at the €15m price then it’s certain Betis will be too. The Seville 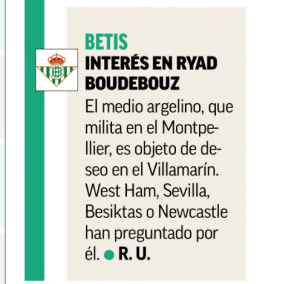 Despite that advantage, there’s still no suggestion that West Ham or Newcastle are set to make an imminent effort to close the deal, with all interested clubs seemingly waiting for a price drop.