If there is one thing that appears certain in the West Ham and Newcastle United transfer plans, it’s that any move for Antonin Barak will have to wait.

That’s because Verona, where the Czech Republic international is currently excelling, don’t want to part ways with him midway through the season.

Signed for €6m, his value has ‘more than doubled’ of late, with the Serie A side, knowing full well of Newcastle’s and West Ham’s interest, ‘start from a request of €20m’, according to Gazzetta dello Sport.

The Hammers and the Magpies aren’t the only ones interested either, as Milan and Inter ‘have engaged in a derby from a distance’ for the attacking midfielder. 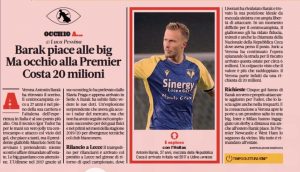 That’s when Newcastle and West Ham are brought up, as they are said to be ‘following him closely’, before Gazzetta makes it clear ‘everything will be postponed until the summer’.

For David Moyes’ side, that shouldn’t be a problem, but for Eddie Howe, he first needs to steer his team clear of the relegation zone before thinking of signing Barak once the season is over.