For a while now, everyone has known that Tottenham are after Dejan Kulusevski.

It all stems from Fabio Paratici, who was the one who signed the Sweden international at Juventus, and is reportedly keen to offer him on a platter to Antonio Conte.

Regarding the Tottenham manager, it remains to be seen whether he really does want the winger, as reports do vary on that.

Either way, the reported desire to sign the Swede refuses to go away, as Gazzetta dello Sport make it clear on Thursday that Spurs are ‘insisting to get to’ Kulusevski in the current transfer window. 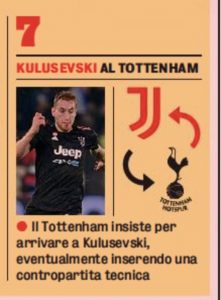 To do some, they could ‘eventually insert a technical counterpart’, meaning a player, but that remains to be seen.

We’ve seen the likes of Giovanni Lo Celso and Tanguy Ndombélé linked in the past, with Japhet Tanganga the latest mooted.

Either way, that’s the latest line, and this one appears to be one that will continue for weeks to come.